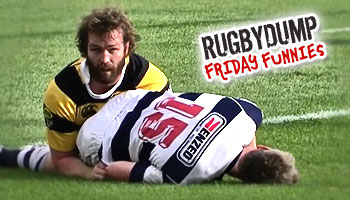 Last weekend Taranaki pulled off an impressive 39-11 win over Auckland in their ITM Cup meeting in New Plymouth. With things evenly poised in the first half, Jason Eaton took it upon himself to poke a bit of fun at Brent Ward.

Yes, poke. Not the kind you do on Facebook either. This was more along the lines of John Hopoate, as the Kiwi commentators eluded to, between their giggling fits.

Hopoate was a Rugby League player in the NRL, who was suspended in 2001 for 12 weeks after he stuck his finger where the sun don’t shine on not one, but three players. In the same match. He claimed it was just a bit of gamesmanship as he attempted to ‘give them a wedgie with my finger’, but they felt slightly differently, resulting in the big suspension and Hopoate making headline news around the world.

“It wasn’t a wedgie. That’s when your pants are pulled up your arse. I think I know the difference between a wedgie and someone sticking their finger up my bum,” said Peter Jones, one of the unfortunate victims.

In Eaton’s case, Brent Ward got the wrong end of the stick, as Eaton couldn’t resist having a little go at him. The good news is it was all just a laugh, nothing too sinister, and no further charges will come into play. Ward did walk a little funny afterwards though.