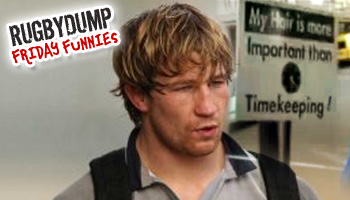 Weve had numerous requests for this clip throughout the week, since it was first uploaded a few days back.

The clip features Munster and Ireland hooker Jerry Flannery as he leaves the hotel and walks through the streets of Auckland CBD while on tour in New Zealand.

Hes obviously been late for a training session or meeting because he was working on his hairdo, so has been punished by management or the squad.

We dont know too much about it, but by the look of things, the punishment is to don a lovely pink shirt and some tight leggings, then walk through the streets blowing his fog horn and yelling the same thing his sign says – My hair is more important than timekeeping.

The clip apparently comes from Anthony Foleys DVD, Axel: Munsters Heineken Cup Journey and has amateur footage that looks to be filmed by one of his teammates.

The streets of Auckland will never be the same as this burly Irishman struts his stuff, creating quite the fuss and attention as hes egged on by teammates Mick ODriscoll, Peter Stringer, and Paul OConnell.