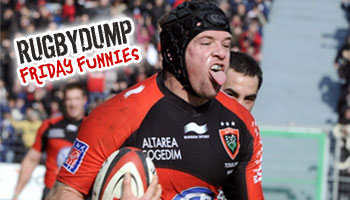 Today’s funny clip comes from the Top 14, and was actually requested by one of the guys on the field when it happened. It features Joe Van Niekerk finishing off a lovely Toulon try, but losing serious man points on the dive.

Toulon thumped Bordeaux 44-7 after a slow start to the game. Captain Van Niekerk started things off when he got on the end of a great little move off the back of the scrum that went something like 8, 9, 15, 14, back to 8, then inside to 7. That’s positions, not numbers on their backs as it looks like Steffon Armitage was scrumming at number eight at the time.

Luke Rooney also scored, as did Sebastien Tillous-Borde and Welshman Eifion Lewis Roberts, who scored twice after coming on as a second half substitute.

The request for this video, as mentioned earlier, actually came in from number 6 on the day, Joe El-Abd. He found the dive so hilarious that he wants it to be shared with rugby fans around the word, so we’ve obliged.

“My brother that’s what ya call vertical jump with 10cm height next time I will try and get a few more cm’s in distance!!!” Van Niekerk tweeted back.

The try itself was quite good, so it’s worth showing anyway and hopefully by exposing Van Niekerk’s awkward looking effort he’ll put some time into perfecting it, perhaps with Matt Giteau by his side. Or, in future he can just dot it down and stroll back casually like the rest of the forwards.