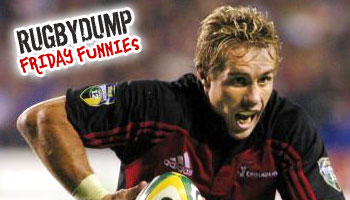 It’s not the first time that former All Black Justin Marshall has made it into our Friday Funnies slot. He’s single handedly featured in more Friday laughs than any other player. Here’s another quick clip of him in action, in another short but amusing clip.

It’s hard to know why that is, but maybe it goes to show what a long and eventful career he’s had.

This clip is from the Super 12 in 2005, when burly Brumbies loose forward Owen Finegan helped Justin Marshall on his way as he stumbled out into touch after being ankle tapped.

Marshall, who was heading for the advertising boards and was off balance, took it upon himself to dive over the boards, rather than collide with them. The result was pretty spectacular and despite Finegan perhaps shoving him when he was already out, was well handled by both players.

Phil Kearns summed up Marshall’s thoughts nicely with his description of the Wallaby flanker.