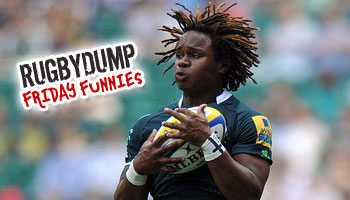 There’s a lot going on this weekend, with Six Nations and Super Rugby taking center stage, but there’s still time to share this fairly amusing moment from the LV= Cup a few week’s back, where a young man’s eagerness got the better of him.

Speedster Marland Yarde, who scored three tries for England u20 in their thumping of Scotland u20 recently, is being touted as a future test star. The young London Irish back scored a first half hat-trick in that game, and it probably won’t be long before we see him pushing for higher honours.

In the LV= Cup game against Scarlets a few weeks before that however, he somehow managed to stop himself from scoring a first half try that would have given the Exiles a handy lead.

As you can see in the video below, as he reached out to place the ball he got his other hand in the way, preventing the grounding. It’s probably not as much funny as it was unfortunate, and a little uncomfortable to watch, but it was requested to be shared on the site, so here it is.

Take a look at the related videos below for more classic bloopers over the tryline. If you’re watching matches this weekend, please make a note of incidents you spot, then get in touch and hopefully they can be shared with the rugby viewing public around the world right here on RD.