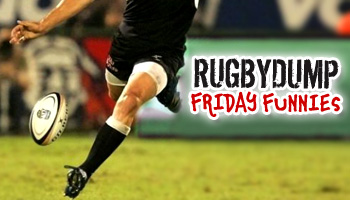 The Sharks played the Force last weekend in Perth in an entertaining match where we saw pink vs black as the Sharks came out tops 22-10.

The Force kept the visitors under pressure for long periods, but the Sharks took their chances scoring three tries in a second half blitz.

The Sharks are now in an excellent position, having won five out of six matches, and with six of their last seven games at home.

This amusing moment from the match came when cannon-boot Francois Steyn attempted to clear a kick from the Sharks tryline.

Force scrumhalf Josh Valentine effected the charge down, but came off second best as the ball rocketed into his midriff.

Steyn is one of the hardest kickers of a rugby ball around, with a prodigious boot, one you certainly dont want to get in the way of.