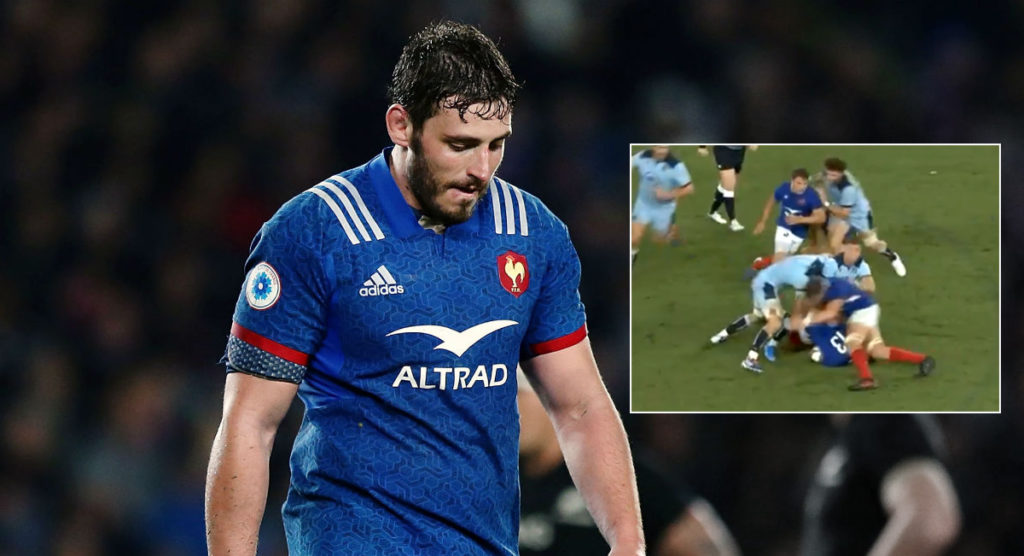 France’s Paul Gabrillagues finds himself in hot water after being cited for a clearout on Scotland flanker John Barclay at the weekend. The Stade Francais lock will face a hearing on Tuesday, with a number of fans on social media calling for a lengthy ban.

This comes just a week after All Blacks second-row Scott Barrett was shown a red card for a dangerous tackle on Wallabies skipper Michael Hooper. The majority of the rugby world felt referee Jérôme Garcès made the right call showing Barrett a straight red, although his subsequent three week ban was deemed lenient.

On the other hand, Gabrillagues’ challenge has been deemed far worse by fans on Twitter, as the lock ran in with some force straight into Barclay’s head. It is debatable whether any arm was involved in this clearout, and what is worse is that he dived straight off his feet. If Barrett’s punishment is anything to go by, many fans feel this should be a longer ban.

However, the main thing that separates these two incidents was the fact that Gabrillagues got away with it in the match. Consequently, the officials, particularly referee Nigel Owens, have been admonished by fans for missing this, even after Barclay had raised it.

Scott Barrett got Red for much less. Clear red .. dangerous and wreckless play.

Should be banned. No hands, straight to the head

While the citation is grudgingly good news, the fact is that, for all the noise World Rugby makes about cynical or foul play, this sort of shit is still endangering careers and lives in ACTUAL REAL TIME.

Until such time as action is immediate, citations are too late. https://t.co/wmAinYj10N

Can we cite the referee, two. Assistants and the TMO for missing this also. Especially as it was brought to their attention at the time.

Why did Owens not check it? He might well not have seen the impact but definitely saw Barcs being laid out with no French player close. Crazy

While France ran out comfortable 32-3 winners in Nice, France head coach Jacques Brunel will now be concerned over the availability of Gabrillagues over the next month and even into the World Cup.

The lock will be available to play in Japan should his punishment be the same as Barrett’s, although he will miss the remaining warm-ups against Scotland and Italy. But if the punishment is any worse, which many feel it should be, his World Cup could be in jeopardy.