Gaby Lovobalavu's crucial tackle looked innocuous, until he was cited 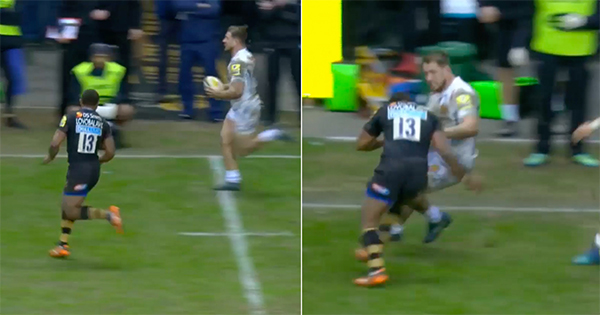 Gabiriele Lovobalavu was cited and has been suspended for a crucial tackle that he made in the closing seconds of Wasps’s Aviva Premiership clash with Exeter Chiefs on Sunday. He appeared before a disciplinary hearing in London last night.

The former Toulon centre was cited by an independent citing commissioner for the dangerous tackle he made on Sam Hill, contrary to law 9.13. That law states:

Lovobalavu, capped 22 times by Fiji, contested the charge but was found guilty by the panel.

“The panel found that the player’s shoulder had struck the head of the Exeter player following a tackle that had been recklessly high and delivered with force,” said panel chairman Jeremy Summers.

“The panel are mandated to enter at mid-range and having given the player credit for his clean record and other mitigating factors, reduced the sanction by two weeks. He was not eligible for full credit having not accepted the charge.”

He was given a four-week suspension and can return to play again on 10 April 2018.

With Exeter Chiefs having one final counter-attack in the hopes of snatching a win, Lovobalavu’s tackle effectively ended the contest and was not looked at by the referee or officials at the time.