Gareth Edwards' great try for the Barbarians in 1973 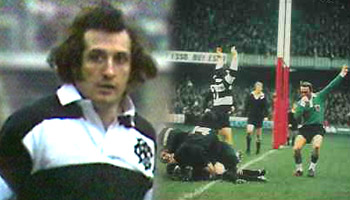 The Barbarians and the All Blacks met at Cardiff in 1973 and the match produced a moment that will never be forgotten, and has since been recognised as one of the greatest tries ever scored, if not the greatest.

That moment, one of the most played clips on television, came right at the start, when after just four minutes Gareth Edwards scored one of the best tries ever recorded on film.

“The game against the All Blacks is one I will never forget and those of us who played in it will never be allowed to forget,” said Edwards.

It was the Welsh half-back pair of Phil Bennett and Gareth Edwards that started and finished the move. Gareth remembers the day vividly. “The game against the All Blacks is one I will never forget and those of us who played in it will never be allowed to forget. It is a match that will live with me forever.

“People tend only to remember the first four minutes of the game because of the try, but what they forgot is the great deal of good rugby played afterwards, much of which came from the All Blacks.

“After the success of the 1971 Lions tour, which captured the imagination of the whole country, it was an opportunity to bring a lot of that side together again.”

This try is widely regarded as one of the greatest tries of all time, with a great piece of commentary