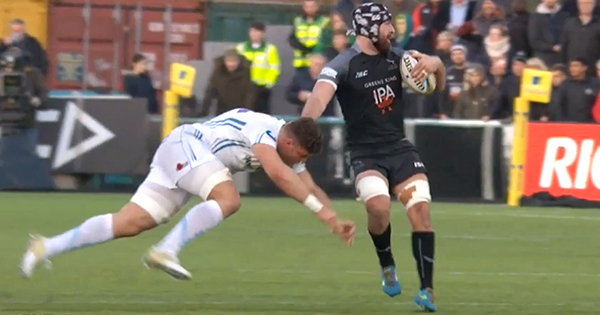 It definitely was reminiscent of great winger Rokocoko, who made it a bit of a trademark in his early years. Hats off to Graham though. As bizarre as it might have looked, he executed all three spins and fends perfectly.

There has been a lot of talk about if the Scot will play in this year’s Six Nations, and more importantly, which team he will play for after he was recently called up to England’s training squad.

His father, George, played 25 times for Scotland between 1997 and 2002, and is now head coach of Hawick. Gary says that his father is fully supportive of him, no matter what happens.

“My dad was my rugby hero and I always hoped I would be something like him. He is the most passionate Scot I’ve ever met in my life, but he wanted to play at the highest level he could and so do I. I was brought up in England and I’d really like to play for England.”

Graham has played for Scotland under 20s, and was as surprised as anyone by his England call up.

“I’d never ever thought about playing for England or even being selected for a camp. I’ve only been in the Premiership since the start of the season. I was happy with my progress, but I didn’t think anyone else was.

“Dad is really proud. He’s happy for me.”

Newcastle Falcons host Russian champions Enisei-STM at Kingston Park in the European Challenge Cup on Sunday. Kick-off is at 3pm