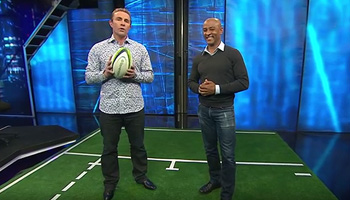 George Gregan is widely regarded as one of the best nines to ever play the game of rugby and in this informative clip for SKY SPORT NZ he gives some valuable pointers to anyone wanting to improve their game.

There’s an amusing part at the start of the show that shows Justin Marshall skip past Gregan in what can only be described as shockingly bad positioning and defending, before other clips from the 1999 World Cup, and Aaron Smith and TJ Perenara showing how to attack.

Gregan held the Test appearances record with 139 before Brian O’Driscoll overtook him last year. He is now in third place overall, with Richie McCaw having recently become the most capped player of all time, currently sitting on 142 Tests for New Zealand.

Marshall himself, a mainstay of the All Blacks for a solid ten years, was capped 81 times.

Remember, as Gregan says, are you playing for your team or the opposition?

The Springboks recalibrated their high-ball defence to fine effect, dominated the set-piece and smashed the Lions 27-9 in the second Test.

Ref Watch: Am grounding, fortunate Kolbe and why Jaco Johan can take a week off

This change in temperature was in no small part due to referee Ben O’Keefe’s outstanding communication and game management skills.

Jacques Nienaber has hinted Rassie Erasmus’ social media rant allowed South Africa to focus on squaring the British and Irish Lions series out of the spotlight.