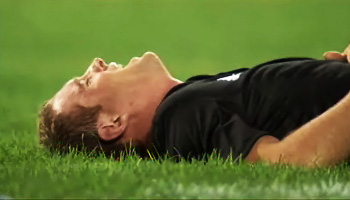 Since the weekend I’ve received a few emails from guys wanting to see how New Zealands’s number nine Andy Ellis bruised his ribs in the epic Wallabies vs All Blacks test in Sydney.

The injury actually occurred in the first half when in form Wallaby flanker George Smith put in a crunching hit on Ellis as he made a little break after some nice play. To make matters worse, big Rocky Elsom sandwiched him from the other side. A scrum half stuck between two powerful loosies is not a pretty sight. Well, maybe for some.

Not for Ellis, but he did continue besides looking laboured, and got himself a nice try early in the second half before being taken off to stick an ice pack on those aching ribs.

Replacement Jimmy Cowan came on and also ended up injuring himself, resulting in the All Blacks now having two battered halfbacks leading up to the next test at Eden Park.

A trim looking Piri Weepu has since been called up as backup, and will be determined to make an impact if his services are required.