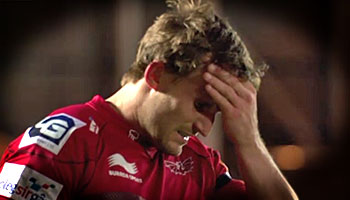 Ospreys loose forward George Stowers has been cited for striking Andy Fenby as the Scarlets player crossed the tryline in their RaboDirect PRO12 game at Parc y Scarlets on Friday. Stowers will face a disciplinary hearing tomorrow.

Samoan Stowers has been cited under Law 10.4(a) for his tackle on Fenby, which resulted in the wing dropping the ball over the tryline in the act of scoring. The referee called for the Television Match Official to check whether the try was scored or not, but there was no mention of foul play.

“I think Andy was over the line and got a swinging arm in the chops,” said Scarlets head coach Simon Easterby. “So I think it certainly had an effect on him grounding the ball. That’s disappointing, but I don’t think it’s the referee’s fault.”

Ospreys won the game 23-16, so the try may well have had a significant outcome on the match. TMO Derek Bevan wasn’t asked about foul play, so simply answered the question asked of him.

Stowers will face a disciplinary hearing tomorrow in Dublin, facing a charge of Dangerous Play & Misconduct, with law 10.4(a) stating that “A player must not strike an opponent with the first or arm, including the elbow, shoulder, head or knee(s)”.

While it’s obvious that Stowers was trying to prevent a try, do you think that he should be suspended, or would a penalty try (or a yellow card) have been a better option at the time?