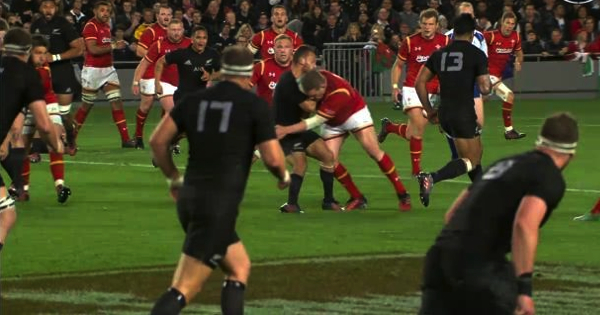 Just as we thought Gethin Jenkins’ career was winding down, he reminded us that there is life in the old dog yet with this HUGE hit on All Blacks fly half, Aaron Cruden, during the first Test between New Zealand and Wales last weekend.

It was 59 minutes into the game, and Wales were still leading 21-18 when 35-year-old Jenkins found himself in the defensive line.

Ben Smith was filling in at fly half when Rhys Webb put him under pressure with a blitz. Smith fed Cruden but Jenkins was ready and waiting, hitting him man-and-ball with a monstrous impact that even got the Kiwi commentators’ juices flowing.

The hit brought back memories of some of Jenkins’ other big tackles throughout his career.

While Wales were to fade and end up losing 39-21, this tackle was the high point of an impressive return to the starting XV from Jenkins.

Rob Evans had been the surprise package of the Six Nations, with Gatland giving the youngster the chance to stake a claim for the jersey – a chance he took with both hands.

In a surprise decision, Gatland opted to revert to the experience of Jenkins for the first Test against the All Blacks. Jenkins showed the outstanding work-rate and jackaling ability for which he is renowned, and was part of an impressive scrummaging performance – a facet of his game which has been questioned of late.

Jenkins has kept his place in the starting line-up for the Second Test this weekend.

The loosehead will be looking to put in an equally impressive performance, as Wales aim to gain their first victory against the All Blacks in New Zealand.

They were praised for their attacking play in the first-half in Auckland, with Liam Williams and George North to the fore in an enterprising backline performance, leading to excellent tries for Taulupe Faletau and Rhys Webb.

Besides his defensive prowess, the Welsh half-backs could do worse than give the ball to Jenkins himself from 40 yards out, as Namibia learnt to their detriment in the 2011 Rugby World Cup.