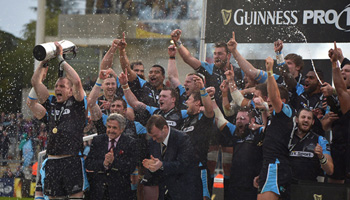 Glasgow Warriors created history last night as they became the first Scottish club to win the Guinness PRO12 with a convincing 31-13 victory over Munster in Belfast.

After finishing the regular season at the top of the table, Gregor Townsend’s men showed just why they are the best team the league with a spectacular first half performance, virtually putting the game to rest with three fantastic tries.

At the forefront of most things good for the Scots, was Fijian second row Leone Nakarawa. The 6ft4 giant used his famous offloads to excellent effect as he orchestrated the first two tries, for Rob Harley and DTH van der Merwe respectively.

Despite Nakarawa’s deserving man of the match title, scrum-half Henry Pyrgos controlled the game superbly from the start, and his third try after half an hour – latching onto a pass from a sumptuous break from Stuart Hogg – virtually ruled out any chance of a full Munster comeback.

Glasgow dominated Munster for the majority of the match and kept up their intensity despite the worseneing weather conditions. The Munstermen didn’t relent however and struck back with a fine effort from centre Andrew Smith on the brink of half-time.

They should have bagged a second after the break but Glasgow just never looked like a side ready to give up on making history. Sublime defensive efforts prevented a further score as they held up Paul O’Connell over the line.

This proved a crucial turning point as the momentum swung back to Glasgow entering the final 20 minutes. And with it came Munster’s capitulation as Finn Russell finished a prolonged period of pressure on the Irish line to score the fourth try, and all but seal the title.

A long range Duncan Weir penalty seven minutes from the end took them past 30 points in a commanding and emphatic victory.

Arguably one of the best moments in Scottish rugby in the professional era, Glasgow now combined sheer exaltation with an equal sense of releif as they became the first Scottish club side to ever win a major trophy.

And head coach Gregor Townsend is convinced there is more to come.

Speaking to BBC Scotland after the match, Townsend said, “We will be a much better team for having won.”

“Jonny Gray is 21, Finn Russell 22, Stuart Hogg is 22. These players have committed to staying at the club and they have seen they can win trophies.”

And he added: “There’s a lot more to come from this group of players and they have now had the experience of winning something, which is fantastic.”

Viw match highlights below, with some of the Glasgow celebrations on page two