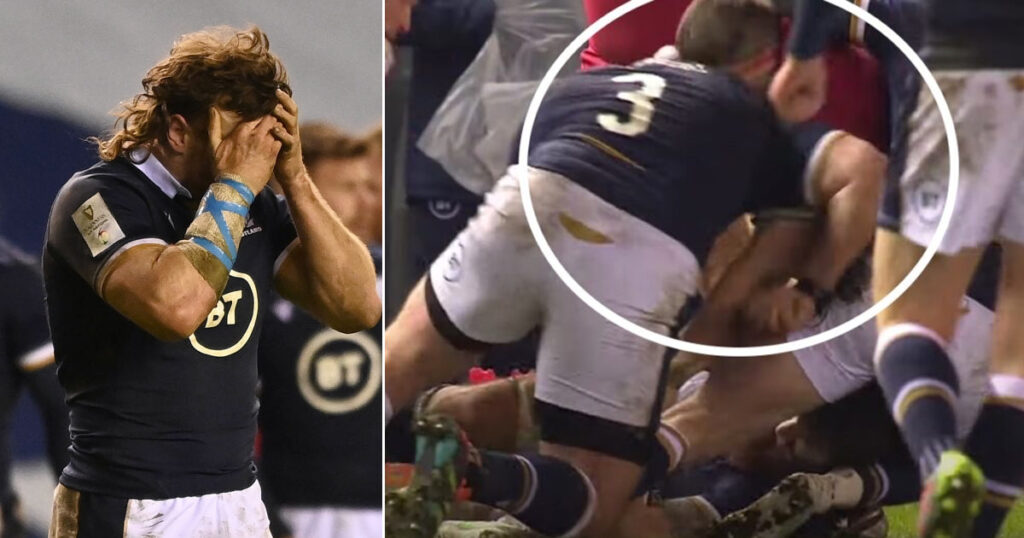 Scotland flanker Hamish Waston has said that players’ health is “paramount” after backtracking from his criticism of Zander Fagerson’s red card this weekend.

The tighthead prop was shown red by referee Matthew Carley at Murrayfield on Saturday for a dangerous clear out of Wales’ Wyn Jones.

Scotland went on to lose the match, and Watson lambasted the decision after the game.

“That was a rubbish call,” the Edinburgh flanker said. “An absolutely dreadful call. That’s not rugby, that call.

“I haven’t heard the comms from the TV but I’ve heard from other people that the TMO said it wasn’t a red, then the ref has overruled him. The ref has the right to do that if he thinks that’s the right call.

“We as players strongly disagree with that call. As soon as I saw it on the TV, I was thinking, ‘That’s not even a penalty’.

“There’s not much else we can say. We don’t think it’s a red, a yellow or even a penalty. But that’s the way the game is going.”

The 29-year-old has now distanced himself from what he has described as “poor comments”, saying on Twitter that “emotions were very high after losing a very tight match.

“Poor comments from me, emotions were very high after losing a very tight match. Players’ health is paramount.”

Poor comments from me, emotions were very high after losing a very tight match. Players health is paramount.

This was a decision that was perhaps not as clear cut as Peter O’Mahony’s red card against Wales the week before, with the commentators undecided whether it was a red or yellow card.

But Carley felt there were no mitigating factors to reduce the punishment, and Watson himself has since stressed the importance of player safety.

Having blown a 17-3 lead, it is understandable that emotions were high in the wake of the result for the Scottish players.

Fagerson will face a disciplinary hearing via video conference on Tuesday evening.

Scotland’s Zander Fagerson will attend a disciplinary hearing via video conference tomorrow (Tuesday) evening after he infringed Law 9.20 (a) & (b).