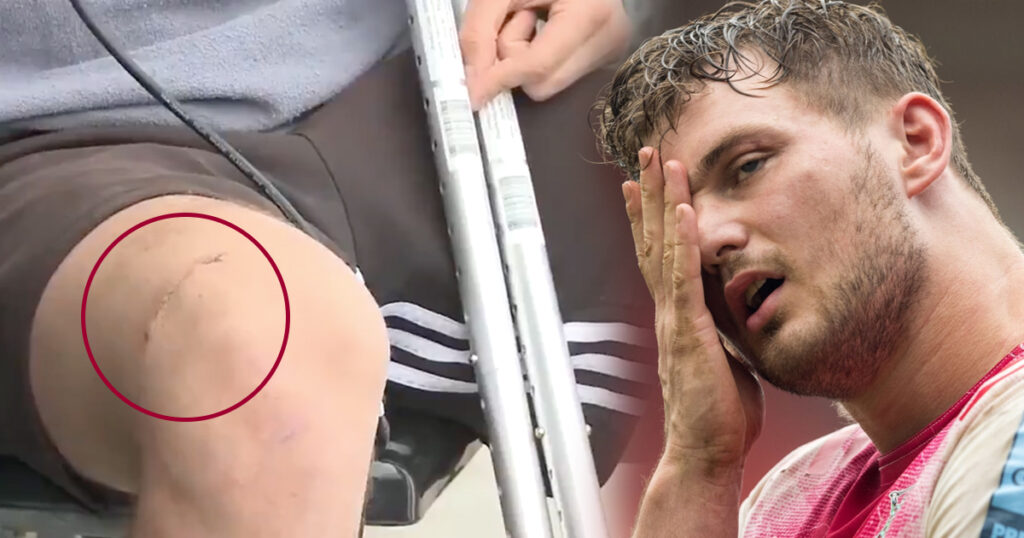 Harlequins flanker Will Evans has revealed that he now has “about a foot length of titanium all the way through [his] tibia,” after breaking it last month.

Evans picked up the injury in the first half against London Irish at the Brentford Community Stadium at the end of April, which put an end to a promising season for both him and his club.

The flanker, who has garnered the nickname ‘The Clamp’ for his prowess over the ball, was being talked about as a potential England debutant this summer on the back of his form.

Huge loss for us, unbelievable player. must’ve been in the mix for England’s summer tour. Unbelievable over the ball and loves a sneaky pick! loved playing with you pal @Will_Evans69 #Theclampwillbeback https://t.co/pi00eBpCZE

Harlequins shared an interview with their loose forward on social media this week, where he outlined the procedure he underwent after suffering the injury.

“They cut me open, went behind my kneecap and drilled a big hole all the way down my tibia. So I’ve got a foot length of titanium all the way through my tibia which is not that nice but I’m a bit heavier now, which I’ve always been grasping for, and surely my leg might be a bit stronger now.”

🚑 Find out why @Will_Evans69 asked people to roast him online while he was on his hospital bed. #COYQ @Silverbug_ltd pic.twitter.com/W7AXuucVMw

Despite Evans’ injury, and a red card to André Esterhuizen, Quins managed to win the match against London Irish thanks to a last gasp try from Marcus Smith.

They played their first match without Evans last weekend after a week’s break and managed to pull off another victory at the death against Wasps.

Smith was once again the try scorer at the end of the match, as Quins battled back once again with only 14 men after a Mike Brown red card (highlights below).

The win gave Quins some breathing room in the top four of the Gallagher Premiership, as they now sit nine points above fifth place Northampton Saints with four rounds remaining.