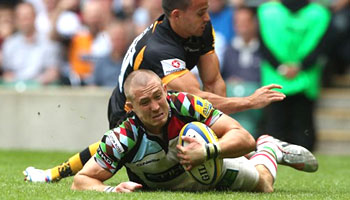 Harlequins mounted a stirring comeback on the opening weekend of the Aviva Premiership season as they came back from 40-13 down to seal a 42-40 victory over Wasps at Twickenham. Nick Evans kicked the winning penalty in his 100th ‘Quins game.

Wasps got off to a great start as they shot to 20-0 up after only 12 minutes, before Harlequins came back sensationally after trailing by 27 points. Evans was key, scoring 22 points by fulltime.

“We were horrific first half and Conor O’Shea had a few choice words with us at half-time,” said Evans. “I cannot explain what was wrong, but we didn’t play and had to really chase the game. Danny Care said to me that if we could come back from this deficit we’d never forget it. We won’t.

“No excuses, we were very poor for too much of the game, but we also showed our character and belief in one another to fight back.”

The new TMO adjudication came into play for the first time as a Tom Varndell try was called back after a forward pass had occurred, costing Wasps a first half bonus point. They picked it up later through Marco Wentzel, but after Tim Payne scored for ‘Quins, the game changed.

Evans’ 77th minute penalty sealed the deal for an astonishing comeback, and great start to the Premiership season. Below are short, official highlights from the match.