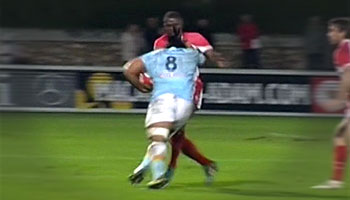 Henry Tuilagi was a popular figure in the crowd in Cardiff when Samoa beat Wales recently. Everyone loves seeing the Tuilagi brothers doing what they do best (except when facing them), so here is a quick clip of him in action that you may enjoy.

Still very much a beast of the modern game, Henry is now 36-years-old believe it or not. Playing for Perpignan against Biarritz a few weeks back he showed a glimpse of his explosive power – which all the Tuilagis seem to possess – as he sent Zee Ngwenya into orbit with a huge handoff.

In fairness, Ngwenya probably weighs less than Henry’s thigh, but it was still fun to watch.