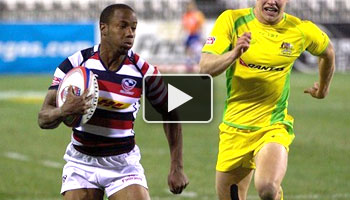 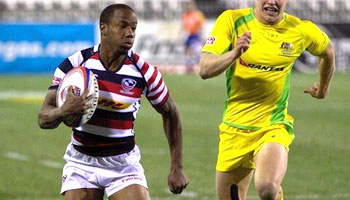 The USA leg of the Sevens World Series commenced in Las Vegas yesterday, with four teams – Samoa, Fiji, South Africa and New Zealand – winning going unbeaten. Eight pool games and the playoffs are on Saturday, with the Semis and Finals on Sunday.

There were also a few upsets, as Spain achieved a top quality 24-14 win over Australia and Portugal beat  Wellington winners England 21-5. England also lost to Fiji earlier in the day.

“I think the Series is very even, anyone can beat anyone and that shows by the results,” said Portugal coach Frederica Sousa. “We just need to consistent. For us it is very important, unfortunately we had that narrow loss against Scotland but we will fight back against Fiji.”

Canada picked up a good win over Kenya, while host team the USA struggled in front of their home crowd, losing both their opening games, despite Carlin Isles grabbing a well taken try.

All 16 teams are in contention for Cup quarter final spots ahead of the remaining pool games.

Defending champs Samoa, one of the four sides to go unbeaten on the first day, had to come from 12-0 down against the impressive Spain team, winning 19-12 in the end.

Coach Faamoani Lalomilo paid tribute to the opposition, and the fans at the Sam Boyd Stadium.

“It was really tough. Spain, they wanted to win the game, but I am happy with the boys, especially in the second half. It is a second home, a big ground for Samoa, and the boys have to work hard for the fans too. It is not easy to defend the title, but we have to work hard on our plan,” he said.