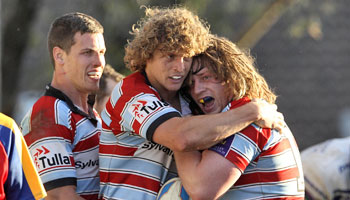 Western Force wing Nick Cummins is set for a great birthday as he’s been called up to the Wallaby squad for their match against Argentina this weekend. A month back he made this cracking hit in a Shute Shield match while playing for Southern Districts.

The Wallabies’ injury troubles and loss last weekend has worked out well for the wing, as he has been handed the opportunity to make the step up for Saturday’s Test against Argentina.

Cummins, who has been selected the day before his 25th birthday, has been part of the training squad but now joins a 22 that includes five changes from the team that played the Springboks.

He was expected to be a replacement for Digby Ioane if he failed a fitness test (knee injury), but Robbie Deans has instead rewarded Cummins with a start in the place of Dom Shipperly.

“Nick has waited patiently for his chance, but has earned the right to represent his country. We know that the Pumas will be coming straight at us, and will be looking to profit in the collision in the same way that the Springboks did last week,” Deans said.

“We have gone for the players we feel are best suited to that approach.”

Big Cummins has been putting in good performances in Sydney’s Shute Shield, and against Eastwood last month he showed that he has precisely the physicality Deans is referring to, as he got the better of winger Nick Reily on a couple of occasions.

The Souths’ back, playing centre at the time, also scored a late try to seal the win for his side.

You may have seen a quick look at this great hit during Plays of the Week at some stage, but here is a longer look at the Honey badger, including his big collision with Reily early in the game.