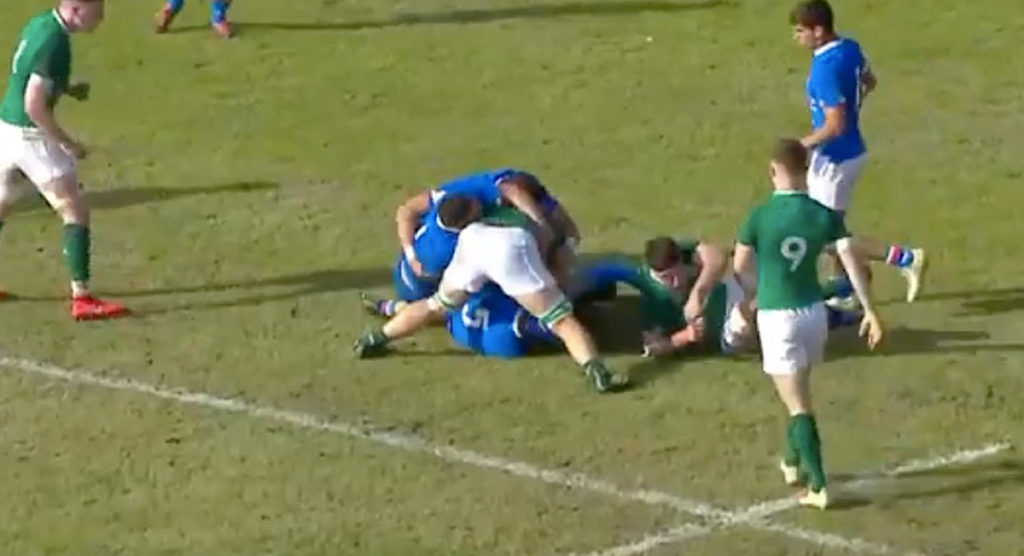 One area of rugby that is under constant review is the breakdown, and how to make it safer. As a result, there have been rumours that World Rugby may ban jackaling in the future, in favour of the former rucking technique of driving over the ball.

Jackaling is area of the game where a player is perhaps put in the most danger, as the manner in which they crouch over the ball leaves their head exposed. The opposing player can come in with some force, and can produce a dangerous collision.

Likewise, jackaling is also dangerous for a player’s knees and ankles. This is because in order to get into the best and stable position, there is always a risk of being hit at the wrong angle.

This was seen in the World Rugby Under-20 Championship today, when Irish flanker Kieran Booth was over the ball and got clattered by an opposition player that had come in from the side, sustaining a gruesome injury.

This is shocking. Jackal position, totally exposed and a player torpedos in at the side. Nasty. pic.twitter.com/uYkkXrkE1Z

The fact that the Italian defender came in from an offside position is fairly inconsequential in terms of the laws of the game, as it is usually a penalty only. However, the damage that it has caused is enormous and can put players out for over a season with ACL injuries.

World Rugby laws state that a player joining a ruck cannot be in front of the hindmost player, which in this instance has clearly not been adhered to. While some may feel that this is a trivial law, it is implemented for moments like these where the opposing player is in a vulnerable position.

Injuries like these only support the calls for the ruck area to be addressed again and something to be done about jackaling. Former Fiji 7s coach Ben Ryan is at the forefront of calling for the jackal to be removed from the game for precisely this reason.

We wish Booth all the best with his recovery from what looks like a serious knee injury.