Hot stepping Nkosi finally gets his chance, but at the expense of superstar Kolbe 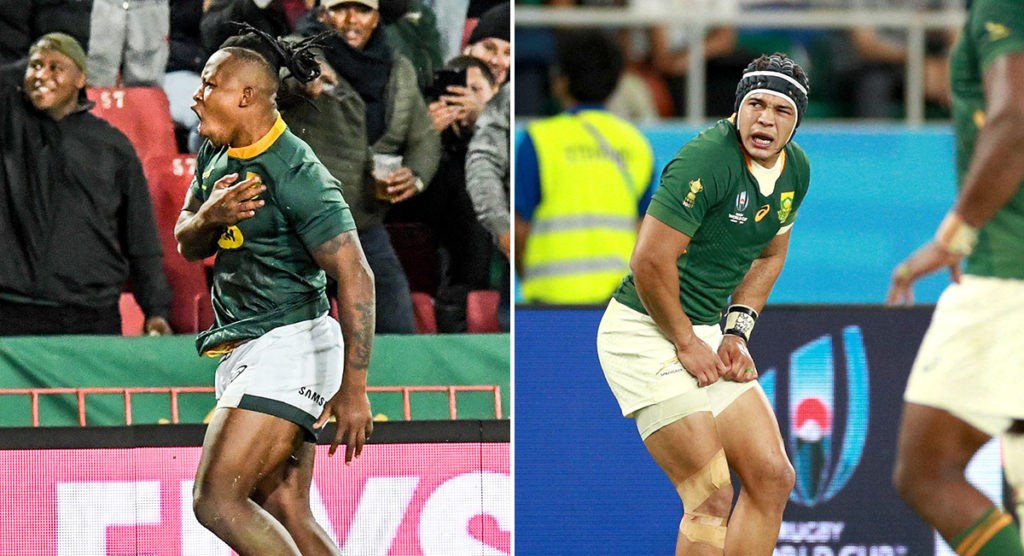 Exciting Springbok winger Sbu Nkosi has been called into the Springbok starting lineup for Sunday’s Rugby World Cup semi-final against Wales at the Yokohama International Stadium. Many fans will feel his inclusion is long overdue, however, it’s another star that misses out.

Nkosi replaces Cheslin Kolbe, who has not recovered sufficiently from the ankle injury he suffered against Canada and aggravated in the quarter-final victory over Japan in Tokyo.

The 23-year-old Nkosi – who has scored eight tries in his 10 Test appearances – slots into the right wing position as a direct replacement for Kolbe.

“It’s disappointing not to have Cheslin available as he has been brilliant for us since we first called him up last year,” said Rassie Erasmus, South Africa’s director of rugby.

“But we really rate Sbu and he will slot straight in. I am as excited to see what he can do as I would be if ‘Chessie’ were playing. Sbu has been very close to selection as it is.”

Nkosi has made two appearances in the tournament, against Namibia and a try-scoring show against Canada – on the left wing – to follow up try-scoring appearances against Australia and Argentina (two tries) in the two South African home Tests in 2019.

His injury-enforced inclusion is the only change to the 23 that had been entrusted to ensure second place in the pool (against Italy) and to secure a semi-final place (against Japan).

“We’ve been fortunate to have been able to be pretty consistent in selection and we’ve built some nice momentum,” said Erasmus. “But the challenge just got a lot tougher on Sunday.

“Wales are the reigning Six Nations champions – as well as Grand Slam winners – and apart from three defeats in their Rugby World Cup warm-ups have put together a really good sequence of results. But we’ve also found some rhythm and we’ll be ready for the challenge.”

The Springbok 23 includes 10 players who appeared in the Rugby World Cup quarter-final victory over Wales four years ago in England (23-19), and nine who are making a second semi-final appearance after losing to eventual champions, New Zealand, four years ago.

“We have been working hard for 18 months to put ourselves in a position to win the Rugby World Cup and that opportunity is now just 80 minutes away,” said Erasmus.

“These players have worked with unbelievable energy to get Springbok rugby back into this position and I know they will leave nothing out on the field on Sunday.

“We can feel the excitement coming from back home in South Africa and how much success will mean to our country. We know we’re playing for South Africa; that this is bigger than an 80-minute game of rugby.”

South Africa’s semi-final with Wales kicks off at 18:00 local time in Japan and 11h00 SA time.

The referee is Jérôme Garcès of France. This will be his 15th Test match as a referee with South Africa involved and his 57th Test match in his career.

The Assistant referees are Wayne Barnes of England and Ben O’Keeffe of New Zealand while Ben Skeen, also from New Zealand, will be the TMO.

Hot stepping Nkosi finally gets his chance, but at the expense of superstar Kolbe | RugbyDump - Rugby News & Videos