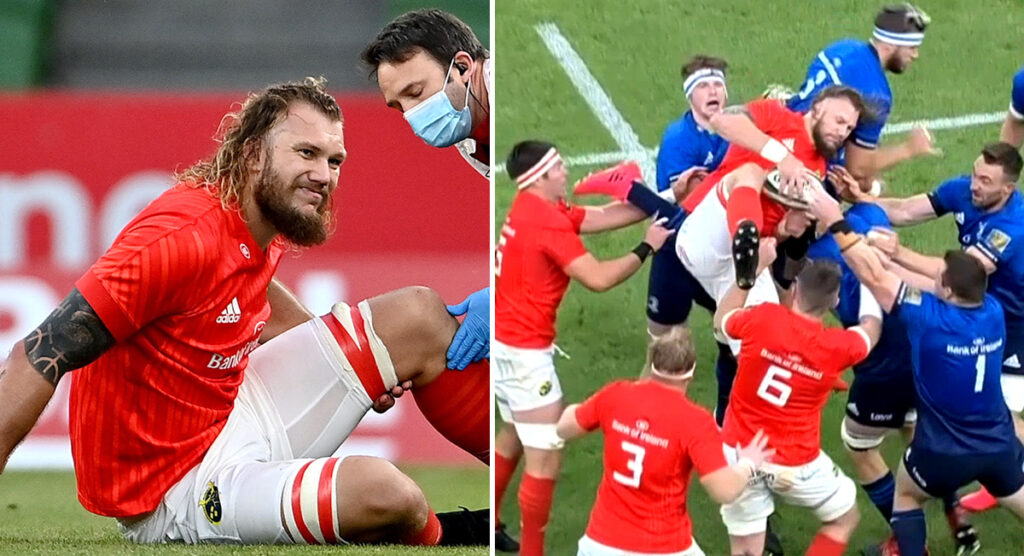 Springbok World Cup winning lock RG Snyman has been ruled out for at least six months with a knee injury. Snyman was diagnosed with an Anterior Cruciate Ligament injury after falling hard in the 7th minute of his side’s 27-25 loss to Leinster in Dublin on Saturday.

The big second row, who was signed alongside fellow World Cup winner Damian de Allende as the two big moves in the summer for Munster, is unlikely to see action again until late in the new season.

Snyman limped off and the worst was feared, something that was confirmed by the club on Tuesday morning when the ACL injury was diagnosed. Normally an ACL injury requires six to nine months on the sidelines, something that will hit Munster hard after recruiting the Springbok World Cup winner.

“When he was at his most vulnerable, both lifters let him go,” said a member of the commentary team.

“It has been confirmed that the province’s newest debutant, RG Snyman, sustained an ACL tear in the opening minutes of Saturday night’s PRO14 encounter against Leinster,” a team statement said.

“The lock will meet with the specialist next to discuss surgery and management.”

“Dave Kilcoyne and Jean Kleyn have also been ruled out for the immediate future with both players requiring rehabilitation periods for respective ankle and neck ligament injuries.

“The squad gathered at the HPC this morning to commence preparations for the Round 15 PRO14 encounter against Connacht, with players and coaches taking part in the next phase of the IRFU’s routine PCR testing.

Munster face a tough test in the final round of PRO14 this weekend against Connacht, a game they need to win to ensure their spot in the semifinals of the PRO14 tournament.