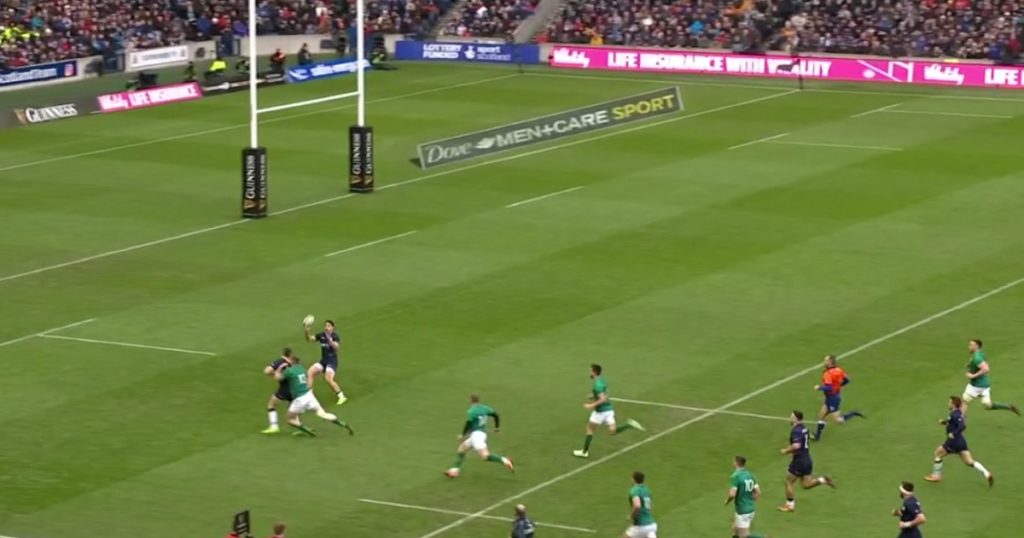 Ireland punished a desperately inaccurate Scotland to bounce back from their opening weekend defeat to England and become the first side to win at BT Murrayfield in the 6 Nations for three years, recording a 22-13 victory.

The visitors went behind to a fifth-minute Greig Laidlaw penalty but were gifted the lead after a catastrophic mix-up between Scotland wingers Tommy Seymour and Sean Maitland handed Ireland scrum-half Conor Murray an easy try.

Joe Schmidt’s side opened the gap after Jacob Stockdale scored a breakaway try but only led 12-10 at half-time as the Scots replied with an excellent Sam Johnson score.

Both teams lost key players – Jonny Sexton went off after 20 minutes while Stuart Hogg also left the field inside the opening quarter – but it was Ireland replacement Joey Carbery who proved the key player in the second period.

The Munster out-half broke through two Scottish defenders to streak up-field before floating a perfectly-weighted pass to the on-rushing Keith Earls 15 minutes into the second half.

Carbery added the conversion and a further penalty to deny Scotland the losing bonus point, but crucially for Ireland’s championship aspirations, they were unable to score a fourth try to secure maximum points from a fixture they dominated.

Scotland were a shadow of their previous week’s self, producing 14 handling errors and winning just four of their seven line-outs. Ireland on the other hand, never looked threatened in the set-piece and convincingly scored their first win of the 6 Nations campaign.

So poor last weekend, Ireland were also a much-changed side, with Rob Kearney just one of five personnel changes to the side that were comprehensively put away by England.

There was more impetus from the Irish and from the get-go, despite Sexton’s injury, they rarely looked like losing the game throughout.

Both Schmidt and Best were pleased with the dominance of the set-piece as well as the defensive shown towards the end of the first half when Scotland failed to capitalise on 20-plus phases of possession deep in the 22.

“I think the set-piece was really strong”, Schmidt said the post-match press conference.

“Our line-out was also very good and our defence was outstanding. I saw a stat at half-time that was 34% of play was spent in our 22, and we didn’t have the ball there so that was massive for us. So we basically spent about 70% of the first half in our territory and it was very hard for us to get out.”

Best concurred: “It was very hard for us at the breakdown and to get any flow to the game, so we’ll look back at that and we want to be better. Last week was strange, we felt we’d done alright in certain areas but poor in others, but we don’t strive for alright, we want to be the best we can be.”