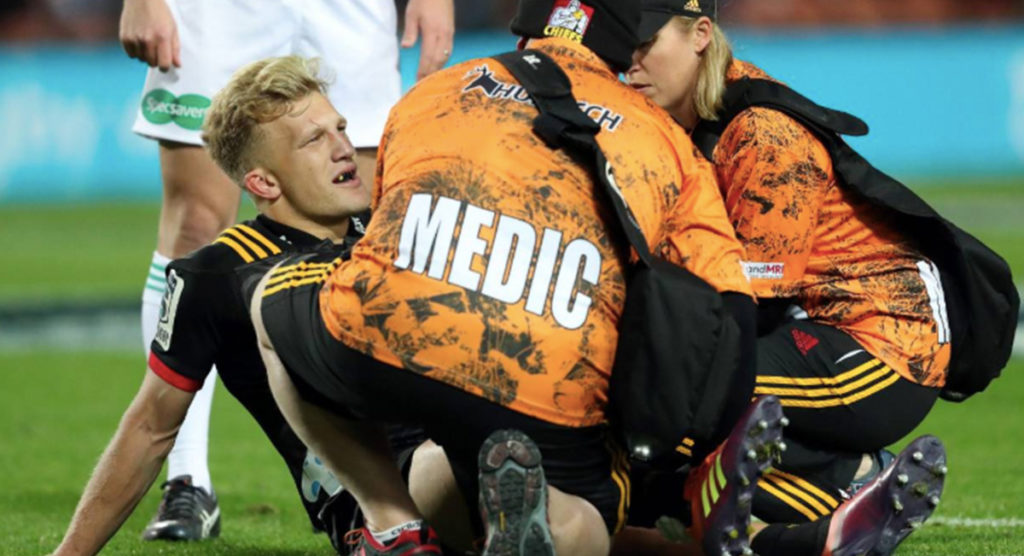 In a moment that no one wants to see, Chiefs and All Black utility back Damian McKenzie has been ruled out of the remaining Super Rugby season and 2019 Rugby World Cup with a knee injury. The injury was picked up in the Chiefs 33-29 home win over the Blues on Saturday.

We’re now in that pre-World Cup phase when fans and teams begin to hold their collective breath in hopes that they’ll be spared any catastrophic injuries to marquee players. Granted, no one wants to see an injury at any time. Unfortunately for the All Blacks, one of their most electrifying players has now been ruled out.

The injury came in the first minute of the second half when McKenzie appeared to clash knees with Otere Black and didn’t return.

Initial fears have now been confirmed. Speaking at their first “Foundation Day”, All Blacks coach Steve Hansen revealed the extent of the 23-year-old’s injury:

“Yeah he’s done an ACL so [it] looks like he could be out for eight to nine months, which is a real shame for him. His World Cup opportunity is gone [but] he’ll still be young enough to make probably the next two.

“It’s just important that he gets his knee right and takes his time to come back and achieve the dreams that he wants to achieve.”

In spite of the loss, New Zealand still have an embarrassing depth of talent in the backs. Stalwart Ben Smith has been able to stay ahead of father time and surely remains the first option at full back. Jordie Barrett is another prodigious young talent who already has Test level experience.

Elsewhere in the backline, Ma’a Nonu showed in this match that he is more than capable of playing Test rugby again as he scored two tries.

Hopefully, McKenzie can make a full recovery as quickly as possible.