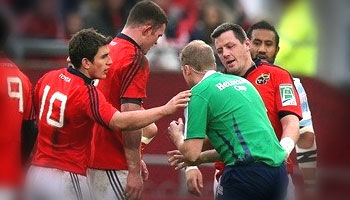 Referee Wayne Barnes was in the thick of the action at Thomond Park at the weekend. The English referee sent off a Racing Metro player early in the game, then just five minutes later took the full force of an Ian Keatley clearance kick, in the face.

As reported yesterday, Barnes showed Racing Metro flanker Antoine Battut a red card just five minutes in for a knee to the head of one of the Munster players as they lay at the bottom of a ruck.

Battut has since been cited, and will appear before a disciplinary hearing in Dublin on 24 January.

After a fairly controversial start to the game, a few minutes later it was all smiles as Barnes found himself a little too close the action, and as a result, nearly swallowed his whistle.

Ian Keatley’s clearance kick smashed him square in the face, knocking the referee to the floor and rebounding about 20m downfield as Barnes sat in disbelief on the floor.

He took some time to recover after being attended to by medical staff, and when asked if he could remember everything, he was heard saying “There’s a few things I’d like to forget.”

When later asked if he was okay, he quipped “We’ll find out when I start running!”

This type of clip would usually be saved for our Friday Funnies, but it’s too good to not share. Enjoy.

There was a very similar incident a few years ago in club rugby in Australia, where the referee was knocked out cold at point blank range by a clearing kick. View that here