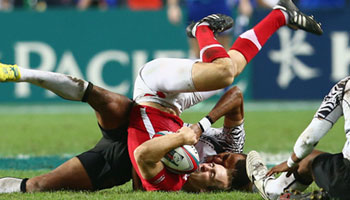 Fiji came back from 19-0 down to win the Hong Kong Sevens Final 26-19 last weekend, but in fairly controversial circumstances after star Ilai Tinai received a yellow card for what could have been a red. He has since been suspended.

An awkward looking first half tackle on Lee Williams was deemed to have been worthy of only a yellow card, despite the dangerous nature of the landing.

Williams wasn’t injured and Tinai was sin-binned only, which in Sevens equates to just two minutes off the field. A red card sending off could have possibly given Wales the advantage needed to hang on and claim their first ever Hong Kong Sevens title.

It’s scant consolation for the runners up now, but Fiji will be without Tinai for the upcoming Tokyo Sevens leg as he was banned for five weeks by an IRB disciplinary committee.

Fiji have called up Japan based Josefa Lilidamu as a replacement.

It’s not often that we see big suspensions in Sevens, but in this case it can be said that the tackle, and lack of on-field punishment, might have affected the outcome of the result. Your thoughts?