Incredible finish to the Bledisloe Cup in Hong Kong 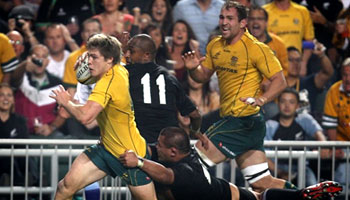 It’s been an incredible few days of rugby as we’ve seen plenty of points scored and many nails chewed off as a few games went right down to the final play, none more so than the Bledisloe Cup game between Australia and New Zealand in Hong Kong.

As we get things in order, there’s much more to come here on RD as this weekend has been the ITM Cup semi finals, the Currie Cup final, Magners League, Aviva Premiership, French Top 14, and of course the big Test which is featured here now. Please be patient as clips are compiled and posts are made over the next day or so.

If you’ve not seen this game yet, best you watch the clip now to avoid the next paragraph spoiler as it came down to an incredible finish that has to be seen to be believed. It’s yet another in the long line of classic matches between the two sides, now ranked number one and two in the world respectively.

Young James O’Connor wrote himself into the history books with his late try and sensational conversion as he joined the likes of John Eales, Matt Burke, Stirling Mortlock, and more recently Kurtley Beale as we once again saw a winning kick separate the two sides with time up.

New Zealand have now had their charge on the world record for consecutive wins broken after many believed they would get their record on this end of year tour.

It was a great game of rugby, and we’ll have full highlights for you soon but for now here is an extended clip that shows the dramatic scenes in the last few minutes of the game. Keep a lookout for Stephen Donald’s missed touch finder, which has seemingly turned him into the scapegoat for the loss.