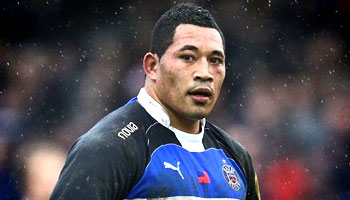 Bath scored five tries as they thumped Northampton Saints 46-14 with a bonus point win in the LV= Cup, setting them up nicely for a home semi final. One of the tries of the game was this outstanding effort from prop Anthony Perenise.

If you’ve been visiting the site for a while you’ll know that whenever a prop scores a great try, you’ll usually be able to see it featured and archived here. This one is one of the better efforts and will no doubt be a popular inclusion.

Samoan Perenise, who played for his country at the Rugby World Cup in New Zealand recently, weighs in at close to 120kg so once he gathers a bit of speed, will always be tricky to bring down. On this occasion he stepped a defender and accelerated away for a wonderful try.

In fact in this game each member of the front row scored, with Ross Batty and Charlie Beech also crossing. Saints were missing 10 players to the England Saxons, so were weakened already and following their heavy Heineken Cup loss to Munster last weekend, proved no match for the home side.

World Cup winner Stephen Donald also scored and Olly Barkley kicked 21 points, but the moment of the game was no doubt this incredible try from the former Hurricanes and Hawkes Bay tank.