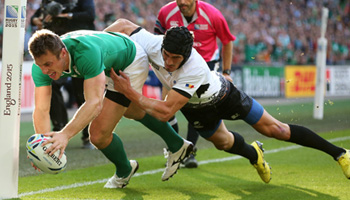 Ireland scored six tries to beat Romania 44-10 in front of the record crowd at Wembley on Sunday. It was their second bonus point victory of the tournament so far, as they build towards what should be a tougher test against Italy, and then a Pool D decider against France.

Keith Earls and Tommy Bowe both scored twice as Ireland romped to another bonus point win, putting them one point ahead of France. While both sides look as though they should go through to the next round, the team that tops the group will avoid a Quarter Final meeting with likely Pool C leaders, New Zealand.

One down side, fullback Rob Kearney is under an injury cloud after picking up a gluteal strain. He will undergo a scan in Guildford today to see whether he is fit enough for the next match.

Ireland face Italy on Sunday, while Romania take on Canada on Tuesday.

[Hear from Joe Schmidt and Jamie Heaslip on the next page]

Are you impressed with Ireland so far, or are we not really able to judge their form based on the opening two games? Let us know in the comments