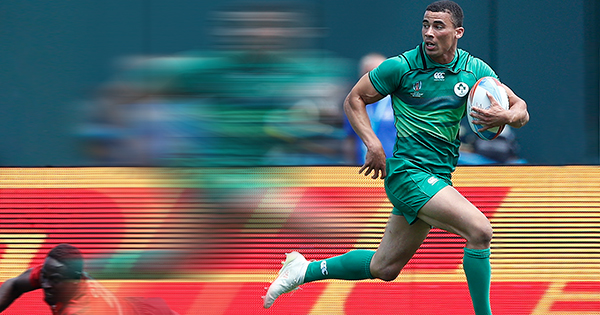 Jordon Conroy took the London 7s by storm last month, and this past weekend in San Francisco gave Ireland plenty more to be excited about as he scored some scintillating tries, including a hat-trick against Kenya.

The speed merchant picked up four tries in their Rugby World Cup 7s campaign, showing yet again that he is a lethal finisher with genuine speed to burn.

While New Zealand’s Joe Ravouvou and South Africa’s Siviwe Soyizwapi finished the tournament as top try-scorers on six each, the Irishman racked up his own bag of memories, helping his side to the challenge trophy final win.

In London Ireland were an invitational side, coming in third place, but in San Francisco showed glimpses of what could be, with wins over Chile, Kenya, Wales and Australia.

They were thumped 45-7 by top seeds South Africa, but their eventual ninth place was well deserved, with a solid 24-14 victory over well established 7s team Australia.

This was Conroy’s speedy finish against Kenya.

He also scored this great try against Wales, given a sniff and seizing the opportunity.

And who could forget his brilliant finish against the USA in London, when he held off the challenge of fastest professional rugby player on the planet, Carlin Isles.