IRPA Try of the Year 2009 awarded to Jaque Fourie 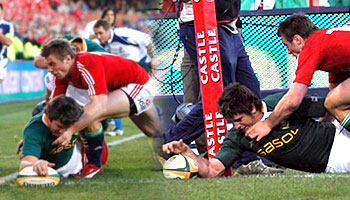 After a public vote via the IRB website, Jaque Fourie’s try in the second Test against the British & Irish Lions has been announced as the International Rugby Player’s Association Try of the Year for 2009.

A shortlist of 15 tries were nominated for the honour, as featured here on Rugbydump and included great scores by Jamie Heaslip’s for Ireland, Ma’a Nonu for the All Blacks, and fan favourite Cedric Heyman’s superb solo effort for France against New Zealand.

Fourie came up number one though, with his late try being vital towards the Springboks’ dramatic series win over the British & Irish Lions. As well as it showing composure, great hands in the lead up, and a powerful finish, the significance of the moment perhaps makes it a worthy winner.

The South African centre, who now plays with the Stormers in the Super 14, was presented his award after their match against the Highlanders in Cape Town on Saturday. He said the award is great recognition of the team ethic within the Springbok squad.

“It is fantastic to win this award and I am honoured to receive it. I would like to thank everyone who took the time to vote online,” said Fourie.

“This try demonstrates the value of team work and working for each other to achieve something very special, and made it such a privilege to be part of the Springboks team and the Lions Series last summer,” he added.

Just under 8000 votes were cast so if your favourite didn’t win and you didn’t vote, make sure that later in the year you make your voice heard by getting involved. You can watch all the nominated tries again by following the related posts link below the video.

:: Related Posts ::
IRPA Try of the Year – The 15 Contenders
Last minute penalty wins epic contest, and series, for the Springboks at Loftus
Highlights of all British & Irish Lions Series matches