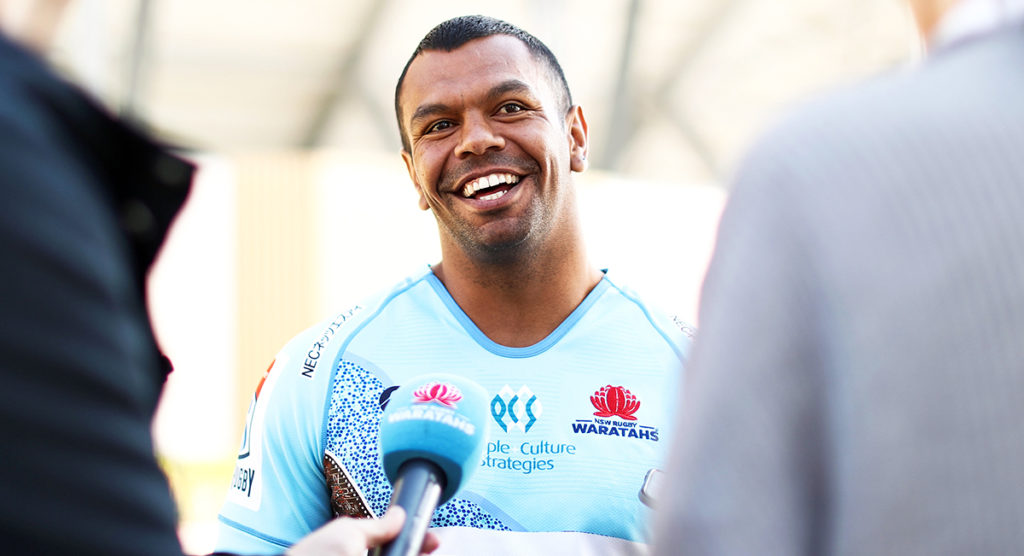 Waratahs playmaker Kurtley Beale has said that he would welcome back ‘unbelievable’ player Israel Folau. The Wallaby was speaking ahead of Saturday night’s Super Rugby game against the Jaguares, a special occasion as the Waratahs will wear their first ever indigenous jersey.

The new jersey was launched at Bankwest Stadium, with Beale and Cody Walker on hand to speak about the importance of the occasion.

He also spoke about former teammate Folau, who this week said he still has plenty of rugby left in him.

Beale told rugby.com.au that he’s hoping to shutdown the Jaguares to give themselves a good chance of a win against the dangerous Argentines.

He has dismissed talk of division within the Wallabies playing ranks, insisting the entire squad of Rugby World Cup hopefuls were happy campers.

He said that Folau’s dismissal was formally addressed in the Wallabies camp when coach Michael Cheika assembled a 41-man train-on squad in Brisbane at the start of the week.

“No, everyone was pretty good. Obviously there’s a lot of speculation around that stuff, but I think those camps are for individuals to step up to make sure we’re all committing to the cause and making sure they’re getting their own backyard sorted so when selection times come around they’re ready to pounce – and there was no sign of that at all.

“It was all positive and I think just a lot of excitement for what we have to come.”

Beale said it was important the Wallabies had the chance to put the Folau issue to bed with the World Cup less than four months away.

“That was one of the main things we did in small groups and we did touch on it. Guys let it out and then we got on with the camp,” he said.

“It’s a bit sad obviously that Izzy’s not going to be in the game anymore, but it’s important that we all keep moving forward now.”

Beale hopes that Folau, who considering his next move, is able to continue playing, though his options appear limited.

“I’d like to see him out on the footy field again,” Beale said.

“That’s where we’ve made some special memories over the years and hopefully (we) see him out there doing what he loves. He’s always got my full support.”

Asked if he would have him back as a teammate, Beale, who has played alongside Folau since 2013, said:

“Yeah if we.. yeah, yeah. of course. I mean, on the field he was just unbelievable. The impact he had and the presence he had on the field was immense and it lifted everyone in the group. He’s an amazing talent and he will be missed.”

WATCH: Full interview with Rugby Australia CEO Raelene Castle on how she dealt with Israel Folau