Italy fully deserving of first ever victory over the Springboks 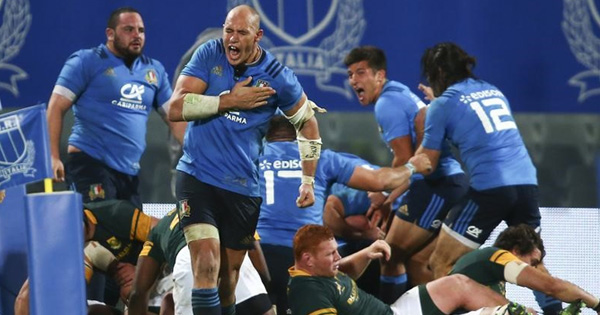 Italy beat South Africa for the first time ever as they put in a courageous effort to win 20-18 in Florence. The Springboks had won the previous 12 games between the countries, but their slump continues as they experience one of their worst ever periods in international rugby.

The Italians’ defensive effort was extremely impressive as they looked far from the team that a second string All Blacks walked all over a week prior.

“They deserved their victory today. Hats off to a spirited Italian side. They tackled and tackled and tackled for each other and put us under pressure,” said Springbok coach Allister Coetzee, who described the loss as the darkest moment in his coaching career.

“No disrespect to Italy, but it’s not good enough for the Springboks to lose to Italy. I can only congratulate them on an outstanding victory. Compared to us, they played without any pressure on them while we looked like a team that lacked self-belief and had a fear of failure.”

Italy coach Conor O’Shea, who actually brought in former Springbok Brendan Venter to help with their defence, said that he was very proud of his troops.

“I’m very happy for the players and the fans. For us, it’s just the start but it’s a very good one and we have a lot to do to change rugby in Italy,” he said post match.

“Today we rode the rollercoaster and we survived by sheer heart and courage. They weren’t just brave, they were heroic.”

Italy host Tonga next, while South Africa head to Cardiff for another tough Test with Wales.