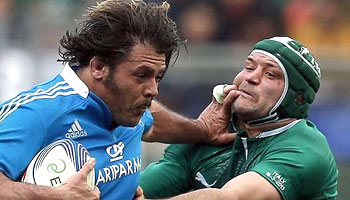 Italy achieved their first ever Six Nations victory over Ireland with a famous 22-15 win at the Stadio Olimpico on the final weekend of the 2013 Championship. They ended the tournament with two historic victories for only the second time ever.

Italy went into halftime with a 9-6 lead before Giovanbattista Venditti scored in the 49th minute. Luciano Orquera kicked 14 points while Gonzalo Garcia slotted a penalty.

Ireland picked up three yellow cards which didn’t help matters, as Brian O’Driscoll, Donnacha Ryan, and Conor Murray were all sent to the sin-bin at various times.

Ireland were unable to breach the Italian defence in front of a passionate and vocal crowd in Rome. It was a great send off for 36-year-old prop Andrea Lo Cicero, Italian record holder for Test caps.

“He is a player of particular strength,” said Italy manager Jacques Brunel. “He has been a great player over 12 years and over 100 caps, and being in his condition at his age is fantastic.”

Skipper Sergio Parisse, who was also yellow carded, was delighted with the achievement. “We’ve won against two countries who have a much longer history of the game than us. It’s a good sign.”

Their second win follows on from the historic victory over France earlier in the tournament.