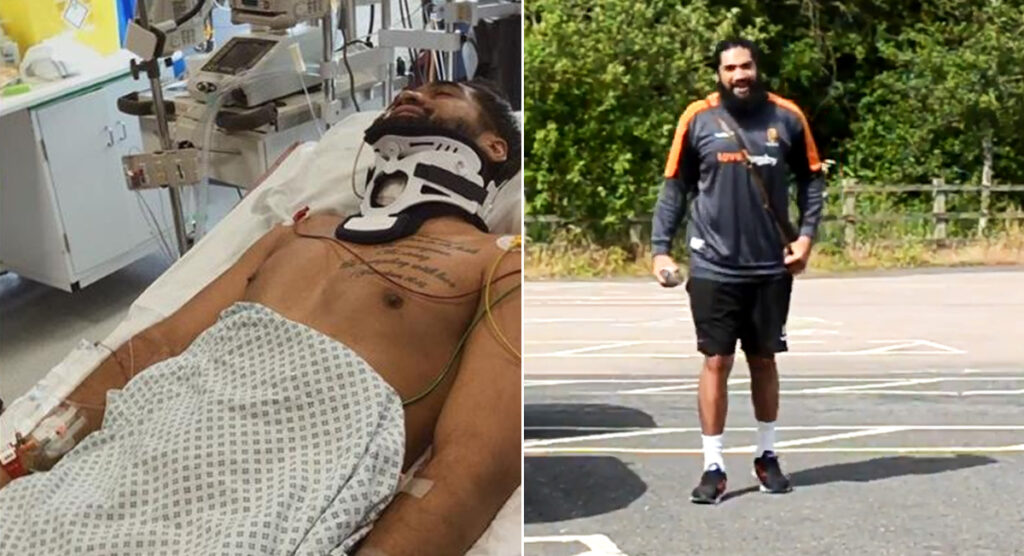 Worcester Warriors welcomed Michael Fatialofa back to Sixways on Tuesday for the first time in five-and-a-half months after the 27-year-old lock suffered serious spinal injuries against Saracens in January.

The Kiwi born lock spent spent five months in hospital – the first of them in the Intensive Care Unit of St Mary’s Hospital in London.

Having made remarkable progress during four months at the Royal Buckinghamshire Hospital in Aylesbury, Fatialofa was discharged 11 days ago and returned to Sixways to continue his rehabilitation under the supervision of Warriors’ medical staff.

Fatialofa was driven to and from Sixways by his team-mate, flanker Matti Williams, who is a near-neighbour in Cheltenham.

He was applauded into the Warriors High Performance Centre by players and staff and greeted by ‘Welcome Back Fats’ banners.

He spent almost two hours at Sixways where he did walking exercises on the pitch under the supervision of Warriors Head of Medical Ryan Kehoe and also had a stint on an exercise bike in the indoor training barn.

For Warriors players, who returned to training on Monday, welcoming back their stricken team-mate was both emotional and inspiring.

“It was unbelievable seeing him again. With the lockdown it’s been a while since I have been able to visit him so it was great to see him face-to-face,” said scrum-half Jono Kitto.

“It’s just incredible to see how far he has come and how well he is doing. We have all been thinking about him and hoping and praying that he is recovering well. Obviously he is. He will be stoked to be back home and the next phase of his recovery.

“I am so happy for him that he is progressing well and he is on the up.”

A fellow New Zealander, Kitto and his wife Lauren are close friends of Fatialofa and his wife Tatiana and they have provided valuable support during the lockdown period.

“They have been talking a lot over this period of time. We visited a couple of times as well,” Kitto said.

“It has been good to be able to follow the progress through T and get the ins and outs of what has been going on and to give her support as well.”

THE DAY OF THE INJURY

Kitto was one of Warriors’ travelling reserves at Saracens when Fatialofa went into a tackle and did not get up from what appeared an innocuous incident.

“It was a weird thing on that day. You began by not expecting to be that bad. Once it got to where it did then your mind goes to all sorts of places and I’m sure Fats’ did,” he said

“The amazing thing about Fats is the mentality he has been able to hold throughout and the hope he has held on to throughout.

“I think that’s a testament to why he has been able to get through his recovery the way he has with so much success.

“Regardless of how anyone else might have thought about it, his belief and faith that he could recover from it has been a big part of why he stands where he does today.

“He’s just a guy who has attacked it head on, taken it for what it is and given it his best shot and maintained a positive attitude which is easier said than done I’m sure.

“Not only that, but being honest about the story all way through it as well. That has been quite inspirational for everyone to see – myself included – but I’m sure the general public have been able to follow the story through social media. It’s an insight into a different way of viewing struggles and problems that come your way inevitably, regardless of how big or small they might be.”

We will continue to report on his progress when possible over the next few months.