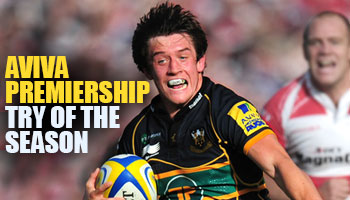 The Aviva Premiership has produced some excellent tries this season, so here is a look at the six that have been nominated for the ITV Sport Try of the Season. The winner will be announced and an awards ceremoney in London on 15 May.

The list features tries from six different players, with both forwards and backs scoring. They are also a nice mix of individual efforts and great team tries.

“Looking at them, any of the top six would be a worthy winner,” said Phil Winstanley, Rugby Director at Premiership Rugby. “Stunning one man finishes and tries that travelled through a dozen pair of hands stand side by side on this so I know how hard it was to decide on the winner.”

The shortlist was compiled by a panel of media professionals and Premiership Rugby panelists.

The winners will be announced on Thursday 15 May at the Aviva Premiership Rugby Awards, where other awards such as Player of the Season and Top Try scorer will also be handed out.

Which try do you think is the best, or was there one they left out?