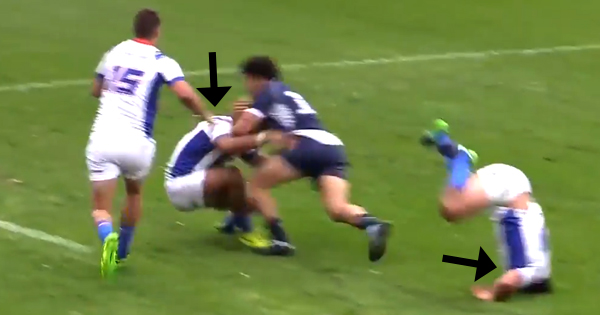 Queensland Country secured their top four position in Australia’s National Rugby Championship on Saturday with a 57-31 win over Greater Sydney Rams. One of the tries of the match came from young Wallaby hopeful Izaia Perese, who bounced off two men to score.

Fijian winger Filipo Daugunu scored four tries but this from Perese will have impressed Michael Cheika, who recently released Perese from the Wallabies camp but asked him to go back to the NRC and hone his game.

“He’s killing it. That’s why I don’t want him to stay here and just train,” the Aussie coach said when sending Perese back to the national domestic competition.

The Brad Thorn-coached Queensland side are now in second position on the overall table, one point behind Canberra Vikings, and look set for a big finish to the comp in the next few weeks.

Perese himself, still just 20-years-old, is looking forward to the next step up, should it come.

“I feel ready (to play for the Wallabies),” he said recently. “If the opportunity did come then I would grab it with both hands.”

At just 1.80m (5ft 11) he may not be the biggest back to ever play rugby, but he’s clearly one to watch and this explosiveness will not have done his Wallaby ambitions any harm at all.