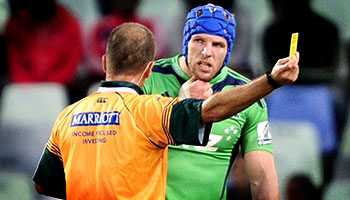 England flanker James Haskell was cited and subsequently banned for punching against the Cheetahs following the Highlanders’ 36-33 win in Bloemfontein. He was yellow carded at the time, despite the assistant referees recommending a higher sanction.

The Highlanders were down to 14 men after hooker Andrew Hore had been sinbinned for a ruck infringement, then shortly after that Haskell joined him on the sidelines.

He has been banned for striking Cheetahs loose forward Justin Downey twice in the face, and pleaded guilty to the offence, receiving a three match suspension.

“Haskell is alleged to have contravened Law 10.4 (a) Punching or Striking when he struck Cheetahs player Justin Downey twice as he left a scrum that was being completed,” said SANZAR.

“The referee for the match, Marius Jonker, consulted his assistant referees and issued both a yellow and white card for the incident. Upon further review of the match footage the citing commissioner deemed in his opinion the incident had met the red card threshold for foul play.”

Referee Jonker appeared to change his mind at the last minute, playing it safe by going for the Yellow and the White, rather than sticking to the original call of a Red card. It’s the second week in a row he’s been involved in a controversial call.

It’s difficult to see what provoked Haskell, other than what could have possibly been a tight grip in an uncomfortable place. Either that or he was just being held back for too long for his liking.

The first replay of the incident failed to show both punches, but later in the game they showed another angle, which has been included here, and that clearly shows the two punch combo that not only sparked a further scuffle, but resulted in Downey having to leave the field with a blood injury.

Update: This post been modified to include the suspension info, as it was originally written before the disciplinary hearing. Apologies for the confusion.

If the series between the Springboks and the British and Irish Lions is supposed to be the pinnacle of world rugby, the game is in serious trouble.

Accusations of foul play levelled against Hogg and Itoje

Accusations of foul play have been levelled against British & Irish Lions players Stuart Hogg and Maro Itoje in the aftermath of a fiery second Test in Cape Town.

Warren Gatland now occupies the territory he was in eight years ago when the Lions followed first Test victory with a second Test defeat.