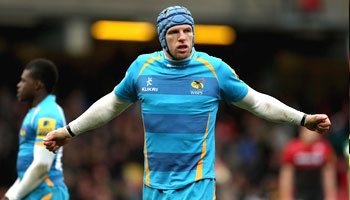 Wasps forward James Haskell was slapped with a retrospective yellow card following the big tackle he made on Saracens’ Alistair Hargreaves on Sunday. Here is a look at the tackle, and an interesting discussion regarding TMO use for foul play.

Second row Hargreaves had an eventful game as he scored his team’s only try, but was also yellow carded for a ruck infrigement, and later knocked out cold by what looked to be Haskell’s head.

The England forward went into the tackle with both arms up, but got his head on the wrong side as Hargreaves ducked down in contact. The South African lock left the field on a stretcher.

Referee JP Doyle referred to Television Match Official David Grashoff for a foul play recommendation, and Haskell was subsequently penalised, but was not shown a yellow card.

He has since received a written warning and the level one citing goes on his record, meaning that if he receives another two yellow cards, he will face a disciplinary hearing.

Saracens Mark McCall said that they were surprised with the ruling: “It wasn’t the greatest tackle of all time. A penalty on its own and no yellow card was a bit lenient.”

The commentary team, including Austin Healey and Ben Kay, had a lengthy discussion about the tackle, the use of the TMO for foul play, and the rise in players appealing for yellow cards.

The whole discussion is included in the video below, so have a watch and listen and please share your thoughts as a comment below. There’s plenty to discuss and while the video features a player being knocked out (never good to see), it was requested for the sake of discussion and reference.

If you’re not registered to comment yet, you can do so here.