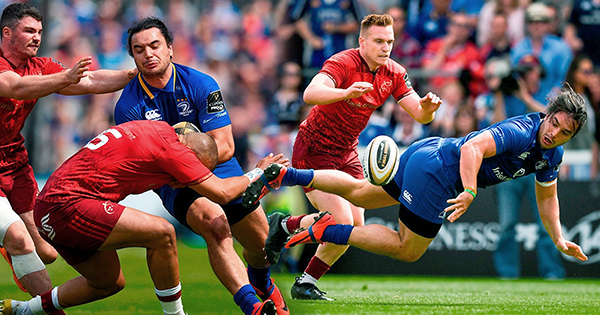 Former Chiefs winger James Lowe was in dominant form against Munster at the weekend, bouncing then stepping Simon Zebo to set up an excellent try on the way to a tense 16-15 Pro 14 semi final victory in Dublin. Leinster will face Scarlets in the final.

Lowe picked up Man of the Match after he set up the first try, a sublime offload to Jack Conan after he had stepped Zebo, whom he bounced just seconds earlier.

“I think if the ball comes your way it’s awesome but early on in the game, mentally, you need to win your first contact, your first breakdown, you don’t want to sit and wait to see what happens,” Lowe said post-match.

“You need to be as dominant as you can, fortunately, those first few plays came off and mentally you’re like ‘yeah, this is it, I’m going to keep doing this’.”

Leinster went on to book their place in the final, at Dublin’s Aviva Stadium.

It was a nervy finish as Gerbrant Grobler – who is heading to Gloucester – crossed for a late Munster try to bring them within a point, but Leinster held on for the win.

They now have a chance at the double, following their Champions Cup victory over Racing 92.

Despite getting the better of him, Lowe gave Zebo due credit for a great Munster career.

“Zebo’s been huge for Munster rugby and Irish rugby and he’s got a new chapter in his life that he’s ready to explore and credit to him he’s given a lot for that red and that green jumper.

“He can be definitely proud of everything that he’s done. Where’s he going, Racing? Bet he’s on big money too. Good on him.”

Leinster face Scarlets, who they beat in their European semi-final, in Saturday’s Pro 14 final.

“It’s been a very long season, the Scarlets are here with something to prove. For them its definitely something they want to target, they came here last time and didn’t get what they came for, so they’re coming this time,” Lowe added.