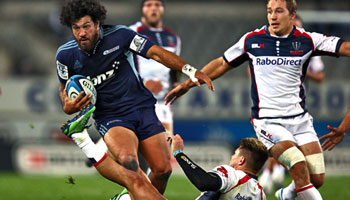 Melbourne Rebels star James O’Connor was injured early on in the 36-32 loss to the Blues at Eden Park. It happened under a pile of bodies at a ruck, and while he tried to stay on the field, rampaging Rene Ranger picked him out, flattening the 22-year-old.

The Rebels conceded five tries in the first half before coming back to score three of their own in the second, earning two losing bonus points as a result. The injury toll was significant though as they lost key man O’Connor midway through the first half.

O’Connor carried a high ball into a ruck and appeared to have his sternum crushed under the weight. He courageously tried to play on, but clearly was in pain and avoided the ball, and contact, over the next few minutes when possible.

As you’ll see though, he wasn’t able to avoid hard running Rene Ranger as he broke through a gap and lined up young Wallaby O’Connor, who fronted up to the tackle but got sent flying backwards.

It was brutal to watch, as it happened just four minutes after the initial injury.

O’Connor immediately left the field and was sent to hospital, where scans revealed that there was no fracture but he will be likely to miss a few weeks with a collarbone injury, damaging his left sternoclavicular joint.

After the game he tweeted: “Painful stuff! popped my sternum out on that kick receipt then didn’t help when I got back up & had ranger with a 40m run up coming at me..”

The good news for Wallaby fans in that it will be a temporary break, and providing he stays out of the path of big forwards and people like Ranger, he should be fit for the Lions tour next month.