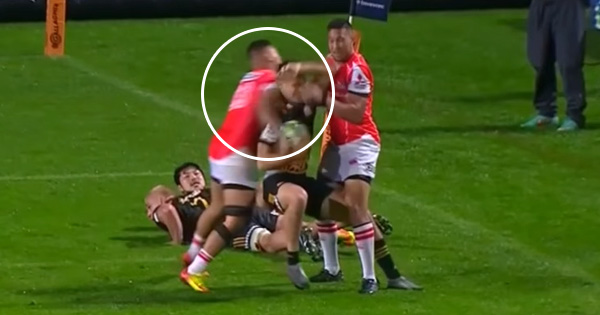 Sunwolves back Jamie-Jerry Taulagi pleaded guilty to contravening Law 10.4(e) Dangerous tackling of an Opponent, after he was Red Carded during the Super Rugby match against the Chiefs at the Weekend. Taulagi has been suspended from all forms of the game for 5 weeks, up to and including Saturday 10 June.

“Having conducted a detailed review of all the available evidence, including all camera angles and additional evidence, as well as an account of the tackle from the player and submissions from his legal representative, Maryjane Crabtree, the Foul Play Review Committee upheld the Red Card under Law 10.4(e) Dangerous tackling of an Opponent.”

“With respect to sanction the Foul Play Review Committee deemed the act of foul play merited a mid range entry point of 6 weeks. 1 week was added to the sanction as aggravation owing to previous dangerous tackles on the Player’s Judicial record.

“However, taking into account mitigating factors including the Player’s remorse, on field apology and early guilty plea the Foul Play Review Committee reduced the suspension to 5 weeks.

“The player is therefore suspended for 5 weeks, up to and including the Saturday 10 June 2017.”