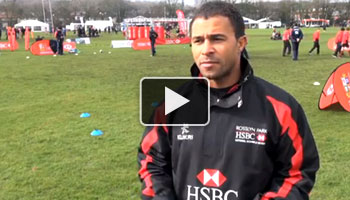 Highly respected England World Cup winner Jason Robinson has warned Stuart Lancaster he must make his beaten England side a stronger attacking force if they are to achieve repeat successes over the big sides in future.

Robinson, who scored in the victorious 2003 World Cup Final and was also part of the last England team to claim a Six Nations Grand Slam in the same year, was left bitterly disappointed by his country’s defeat to Wales in Saturday’s championship decider in Cardiff.

Wales were 30-3 victors, as Alex Cuthbert scored two tries while England could respond only through a solitary Owen Farrell penalty.

As well as losing the Six Nations title and missing out on a Grand Slam, Lancaster’s men have been criticised for scoring just one try in the last four games of the championship.

“It’s a horrible statistic to have only scored one try in the last four games,” said the man nicknamed ‘Billy Whizz’ who scored 30 tries for England.

“The days of just turning up and relying upon a good set-piece and penalties to get you goals are long gone. If you want to win the big prizes you have got to have a team that can create something.

“England and Stuart Lancaster made a massive turnaround but in order to really kick on we need to get this attacking side to our game right. As an ex-player who loved to take people on, that is what I want to see more from the England team,” he added.