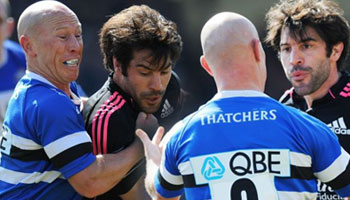 Fillol was alleged to have committed an act contrary to good sportsmanship in that he spat at the Bath Rugby player, Peter Stringer (No 9), during the first half of the match at the Recreation Ground. The complaint was made by the match Citing Commissioner, Eugene Ryan (Ireland).

The Judicial officer found that Fillol had spat in the face of Stringer and that it had been an intentional, deliberate and grave act.

He determined that the act warranted a top-end entry point from the IRB’s Sanctions for spitting and considered that 26 weeks, from the available range of 11 to 52 weeks, was the appropriate entry point.

The suspension will take into account the closed season and will therefore cover a 10-week period from 6 April to 16 June 2013 and a further four weeks from 15 July to 11 August 2013 in addition to the closed-season period.

Fillol is free to play on 12 August. Both the player and ERC have the right to appeal the decision.