It was only in 2020 that Joe Simmonds appeared to be on the brink of international honours, becoming a global name. He had just won the Premiership and the European Cup double with the Exeter Chiefs, and as captain he had just received an MBE from the Queen.

Since then the prospects for Simmonds have greatly diminished, with Harvey Skinner being generally preferred in the number ten position over Simmonds. Due to his poorer performances, Simmonds has also seen his captaincy taken off him in a move sure to have knocked his confidence further.

With this, the fly-half has seen his appearances come more and more regularly from the bench, or more recently from full-back.

The 25-year-old has stepped in at fifteen for Stuart Hogg and Josh Hodge as they continue to struggle with injuries. His two performances so far at full-back have gained plenty of praise from coaches and pundits alike, which has seen him play with the assurance of his double-winning stint a couple of years ago.

Speaking to BBC Sport, Simmonds was very vocal about the pressure he felt and how it affected his performance:

“In the past couple of years I’ve probably let myself down a little bit with how I’ve been performing,

“I kind of just want to put whatever I’ve done behind me and just move on and become this new player.

“I probably put too much pressure on myself coming off the back of that,

“I think it’s kind of normal, you probably would get that pressure, but looking back on it, it probably hindered me a little bit.

“But for me, now I’m just enjoying my rugby. I’ve been playing rugby from such a young age, it’s just game and I’ve just got to perform week in, week out. I try and just enjoy my rugby now more than worry about things.” 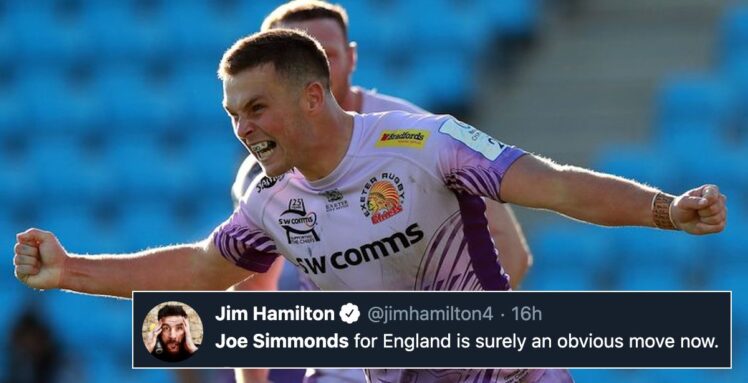 Back in 2020 Simmonds was seen by many to be England’s next great fly-half.

When speaking about his transition to full-back, Simmonds had the following to say:

“I have played a few times there in the last few years, but I’m enjoying it, I’m getting the ball in the hands a little bit more in space,” he added.

“We’ve changed it around a bit with how we attack at Exeter, we had a long pre-season with a lot of changing.

“So for me, if I play at 10 or full-back, it’s very similar positions we get into, and whatever position I get put into I try and do my best, but I do feel like this new shape is helping my game at the moment.”