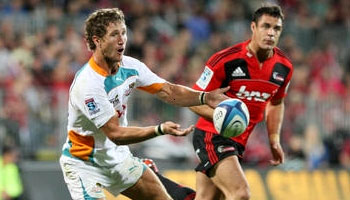 The Cheetahs pulled off an impressive upset win over the Hurricanes in Wellington earlier today, which was a reminder that this classic team effort from them last weekend wasn’t featured during the week. So here it is.

No doubt a contender for try of the season, the Cheetahs turned it on against the Crusaders last weekend and actually were in the game, threatening a bit of an upset at one stage.

The class of the home side came through, but not before the talented guys from Bloemfontein produced this fantastic try, which featured star flyhalf Johan Goosen twice in the move.

Wing Willie le Roux and center Andries Strauss were prominent, and it came about mainly due to the attacking attitude the Cheetahs have embraced in this campaign. Today, in Round 6, they were rewarded for their endeavour with a very impressive 47-38 win over the Hurricanes.

The Cheetahs were behind 32-10 with ten minutes left in the first half, before they pulled things back and went into the break tied at 32-32.

We’ll get highlights of that game up in the archived Super Rugby Highlights section tomorrow, but for now here’s a look at this classic from Round 5, a brilliant example of running into space and offloading in the tackle, letting the ball do the work to beat the man.