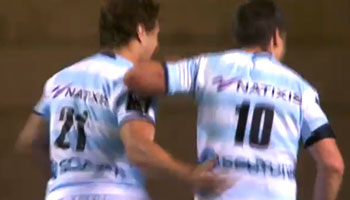 South African flyhalf Johan Goosen made his Top 14 debut for Racing Metro against Montpellier in round one of the tournament this past weekend. Goosen came on as a replacement on the wing, but managed to get himself into a position to kick a long distance drop goal, with Jonny Sexton on hand.

Replays showed that the ball more than likely went under the crossbar, but the officials and TMO didn’t feel that way, and awarded the three points. It was a pretty decent nudge anyway.