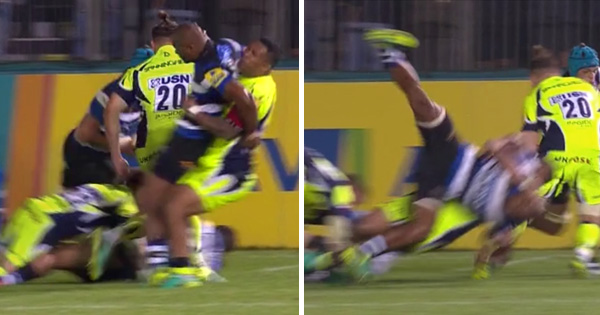 Sale Sharks back Johnny Leota has been suspended for two weeks after he was yellow carded late in the Aviva Premiership match against Bath for flipping and ‘judo throwing’ Aled Brew to the floor. Leota appeared before an RFU discplinary panel last night.

With time almost up in the match, Brew and Leota got in one another’s path and the New Zealand born Samoan flung him to the ground. He then charged at him a bit, before flinging him to the turf a second time. A scuffle broke out but soon died down.

Upon referall to the TMO, referee Tom Foley chose to only yellow card Leota, despite the TMO hinting that it may have been a little more severe. The commentators seemed to concur.

Brew was not injured, despite coming very close to landing awkwardly on his head.

Leota was charged with dangerous tackling – Law 10.4(e) – by the citing commissioner and subsequently given a two-week ban at the discplinary hearing.

He will be free to play again on October 25th.

Below are match highlights, with the incident at the end (not available in all regions)